The Royal Australian Mint has designed and produced a special coin celebrating 2019 the International Year of Indigenous Languages. The Anindilyakwa word awarnda is one of the 14 words from different Australian Indigenous languages that appear on the coin. 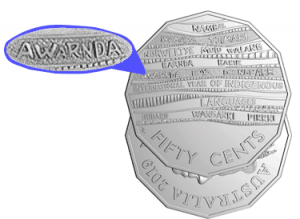 In the Anindilyakwa language and culture of the Groote Archipelago in the Northern Territory, awarnda "money" (notes and coins) is a totem associated mainly with the Wurramarrba Clan of Bickerton Island. The awarnda totem is also connected with the trading patterns and exchanges between Anindilyakwa clans and Macassans over several hundred years. There are songs, stories and sites connected with this totem.

Semantically, awarnda refers to tokens of exchange value, i.e. notes, coins and the general concept of money, while the specific word for coin objects is amamamuwa, which refers to "round things", like seed pods (and coins).

— Anindilyakwa Word of the Day for Friday 11th August 2017